Never forget that being knowledgeable in one’s own history and culture is a great asset for the future of one’s own country. One who is conscious of his own history and feels proud of his land cannot be oblivious of the concern of his own people
Michael Hasama Raka,  Zanta Eritra,  page 168 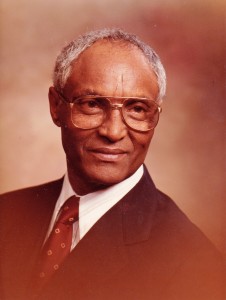 This website is dedicated to the memory of Fit. Michael Hasama Raka, author of the books ‘Future Life and Occult Beings’ in English and ‘Zanta Eritra’ in Tigrigna. Fit. Michael was born in 1920 in Mehlab, Mensa, Eritrea and passed away in exile in 1987.
All his life, Fit. Michael was passionate about Eritrean culture, very attentive both to detail, texture, nuances and all its complex layers. He was an avid collector of written as well as oral tales, poetry and popular sayings in all the Eritrean dialects and languages. He kept recordings of interviews and discourses he had with elders in almost all parts of Eritrea during a span of thirty years when he worked as administrator in the different regions. Many of these he put into notebooks, and many others, especially poetry and songs, he memorized for his own delight. He also owned a rich collection of material written by foreign authors.
Since the early forties when he first served as an officer in the police force of the British military Administration (1943), and then assisted as an interpreter the Four Power Commission of Enquiry (1947), Fit. Michael served as administrator in practically all the Eritrean regions thus acquiring direct knowledge and experience of the customs and uses of most of the peoples of Eritrea.

Fit. Michael was not a historian nor a scholar, but his vast knowledge of Eritrea and its inhabitants plus his deep love of his people give him a unique perspective to chronicle the history of this noble people with a voice both intimate and passionate. Besides writing on the origins, settlements and connections of the Eritrean people, a recurring theme in his narrative is his sadness and great pain at the inhumanity and wanton cruelty with which Eritreans were treated when he was a civil servant of the Ethiopian government. He left occupied Eritrea in 1977 and died in exile in 1987 before seeing the independence of the land he cherished.

He repeatedly wrote with great admiration on how good and generous the Eritrean people were and how their will to extend a helping hand to the needy was a deeply entrenched trait of their character.
He was one of those Eritrean pioneers who grew up during the last stages of Italian colonialism, and formed during the British Military Administration. They hoped that after the defeat of colonialism they will be a vital part of rebuilding their nation. Hope that was immediately shattered by the brutal and needless violence of what gradually turned from anti colonial patriotism and the Federal Act to the Ethiopia military occupation.

As most those his age his hopes turned to the young Eritreans engaged in the war of liberation.
His book Zanta Ertra is dedicated as a testimonial of all those experiences and a dedication to all who gave their lives for their country. His disappointment at the incapability of the leaders of the war of liberation to stay united was palpable in every word he wrote when he told of the events he witnessed at the time. He envisioned a free, united Eritrea, a prosperous nation proud of its identity that accepted and nurtured  its differences fully aware that those inalienable values were what made it unique.

We invite all those who visit the site to interact by adding a little of their own whether correcting, criticizing and freely expressing their thoughts with a mind to strengthen the freedom, unity and prosperity of our people. That was what this humble man desired, with no other pretense other than to tell things the way he saw them and the way he felt them, well aware that he made mistakes and others will do a better work.